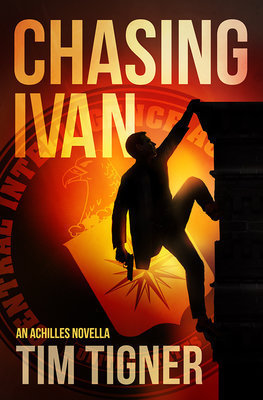 Chasing Ivan is a stand-alone novella (28 Chapters) introducing the series character who debuts in Pushing Brilliance.

A must-read prior to Achilles #3, Falling Stars.

Read a sample chapter on the Books page -- or listen to Dick Hill perform it.

Europe's smartest criminal,
versus America's best spy.
And then there's poor Emily,
stuck in between.

Rumor has it there’s a Russian you can turn to if you’re very rich, and need dirty deeds done without a trace. The CIA calls him Ivan the Ghost because he’s operated for years without leaving a trail or revealing his face.

For the first time in history, Ivan appears to have slipped. The CIA’s new director sets Agent Kyle Achilles on an intercept course, surveilling the daughter of a British politician. Then Ivan pulls off a masterful con, and Emily vanishes.

With Emily’s life, his career, and America’s reputation at stake, Achilles partners with an unlikely new agent he meets in France. Together they attempt to get one step ahead of the legendary Russian, while rubbing elbows with the ultra-rich in a high-tech international chase.