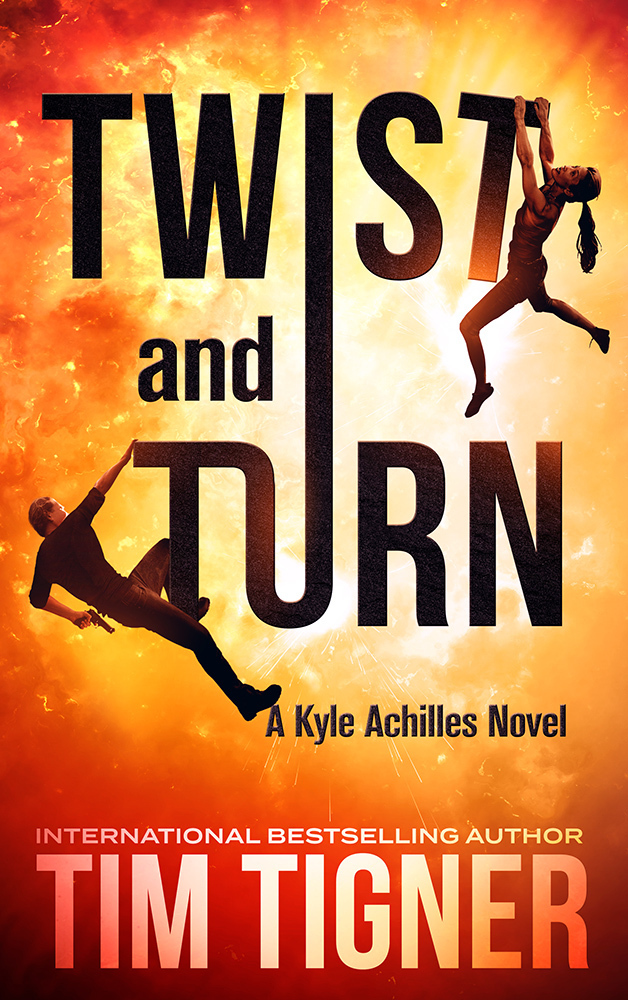 Their plan was brilliant,
their tactics cunning,
but then came a twist,
they never saw coming.

Imagine BREAKING BAD meets THE SUM OF ALL FEARS.

In TWIST AND TURN, author Tim Tigner once again delivers a fast-paced, unpredictable ride destined to delight his fans. Replete with the clever characters, original intrigue and thought-provoking predicaments that distinguish his thrillers, the fourth volume of the international bestselling Kyle Achilles series will dry your throat and keep your fingers flipping.

At the center of the action is a — well, we don’t want to spoil it.

And then there’s the — oh, best not to mention that either.

Suffice it to say that the villains are fresh, complex and fascinating. Their plots inventive and scary. But Katya is back at Achilles’ side, so we might not need to worry. Unless . . .

"Tim Tigner is a master story teller and this one's another epic!"

"The best book I have read in a few years."

"Fantastic! I’m already waiting for the next one!"

"Absolutely Fabulous! I'd give this 10 stars if I could!"

"The action starts early and accelerates until the last page."

"As exciting as any in this genre."

"Rivals the best of masters like Forsyth, Child, and Flynn."

"Will keep you turning pages until late into the night."

"I kept getting up and reading another chapter."

"Great mystery. I was really happy with the ending!"

WAS I DEAD? Had I died? If this was the afterlife, then I’d been deemed lacking. Less than sufficient, or sub-saintly at least.

I had killed. The Lord knew that Kyle Achilles had violated the Sixth Commandment on more than one occasion—therefore I shouldn’t be surprised by His judgment.

I guess I’d expected an exception. A pass. A nod. My kills had been righteous, after all. For the greater good. I’d dedicated much of my life to fighting the honorable fight. The battle where the good had to do bad to win.

And Katya. Poor Katya. She was now alone again. I’d failed her … somehow.

These thoughts all raced around my mind, bouncing off the walls and sending reverberations through my soul, in two sticky blinks of my crusty eyes. I continued blinking as my other senses shucked off slumber and attempted to tune in to the waking world.

My eyes gave me nothing. Literally nothing. They funneled no information through my optic nerves and into my brain. They didn’t hurt. They didn’t feel different. They just reported black, like a television without power.

Was that it? Had someone or something used a drug to pull the plug? To chemically sever a connection? As logical as that seemed, my mind didn’t buy in. It took a different turn because my ears were also off-kilter.

Strain as I might, I heard nothing beyond my own biology—and the breathing of others. Not a sound. No passing cars or chirping crickets. No humming appliances or rustling leaves. Beyond the breathing, my auditory world was also dead. But the breathing was enough, enough to know that my system was online, while somehow, some way, the rest of the world was turned off.

My nose reported next, and it flooded my flummoxed brain with joy. The otherwise stale air held a familiar fresh, floral scent that never failed to warm my heart and lift my mood. Katya’s shampoo.

As I shifted my position to reach for her head, my kinesthetic awareness kicked in. I was resting in a three-quarter prone position, with my legs bent and interlocked and my head braced by both arms. It was close to a standard sleeping posture, but a bit too awkward and precise to be casual. The alignment even had a name.

Recovery position was used by medical professionals and knowledgeable laymen to prevent unconscious people from choking due to a closed or obstructed airway. The ensuing conclusion was inescapable. Like a piece of furniture, I had been arranged.

I reached slowly toward the scent, at once eager and hesitant, longing yet fearful of what I might find. I felt nothing. Nothing but thin air, rising adrenaline and a dropping stomach.

Propping myself up on an elbow, I became aware that I was lying on a floor rather than a mattress. A hardwood floor. I added that fact to the astounding array of puzzle pieces I’d been sorting in the seconds since first opening my eyes.

I extended my hand further toward the sweet scent and found my reward a few inches later. Silky soft strands with a slight curl.

Her body was warm, her chest rising, her heart beating. She, too, had been situated in the recovery position.

I’m not sure why we strive to be quiet in silent situations. Probably residual programming, written in the lizard brain to keep us safe at night. In any case, I found myself compelled to whisper directly into her ear. “Katya. Katya, wake up.”

There is, perhaps, no more contented feeling than lying beside the woman you love and burying your nose in her hair. Despite the extreme and alarming circumstances, now that I knew my love was safe by my side, that simple act put me at peace.

I had no idea where we were.

I had no idea how we’d gotten there.

But by her side was where I wanted to be. The rest was reduced to the status of details. For the moment at least.

As I whispered, I became aware of something tucked into my cheek. Something small, circular and metallic. I carefully expelled it into my hand and instantly identified the familiar object. I’d studied it often in the preceding weeks, with a smile on my face and a swelling in my chest.

It was Katya’s engagement ring. Or at least, it was going to be. I hadn’t actually given it to her. Hadn’t quite proposed. At least, I didn’t think I had.

The last thing I remembered from before waking up in the black was reaching for that ring. That overpriced piece of metal and stone that would symbolize our union—if she agreed to make me the luckiest man alive.

I’d put my hand into my pocket while preparing to drop to one knee—and found it missing. Panic had shocked me like a Taser strike, a horrible, all-consuming visceral pain and then … nothing. My memory ended there like a cut comic strip.

Somehow in the span since that unfortunate event, we had ended up in the deathly darkness that now enveloped us, and rather than onto her finger, the ring had found its way into my mouth.

"Suspense from start to finish.”

"Absolutely the best series I ever read.”

"Best author in the genre.”