The Price of Time 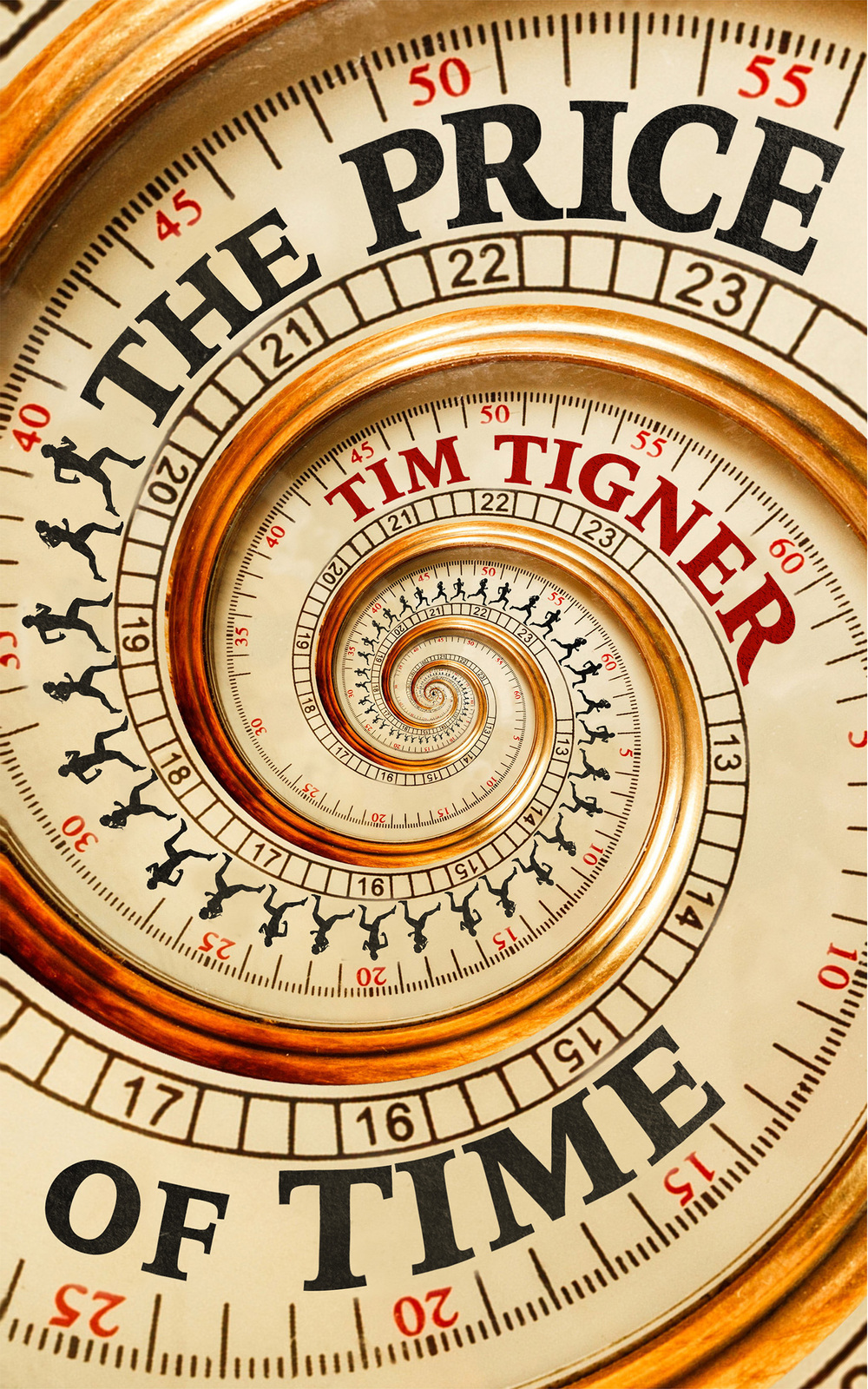 Would your character change ...
if you had all the money in the world?
All the time?
Would you become a better person?
Or worse?

There’s a secret in Silicon Valley. A discovery. An invention. One so startling and surprisingly sinister that it needs to be kept—at any price.

Tim Tigner takes a step back from his bestselling Kyle Achilles series to introduce Zachary Chase and Skylar Fawkes in a fresh standalone novel that’s bound to keep you glued and guessing. With secret meetings, sudden disappearances and strange murders; secret agents, skillful assassins and sexy locations; The Price of Time is packed with fast-paced action and first-class intellectual intrigue.

Propelling the thrills and perched at the middle of the mystery is one of humanity’s great questions: Would finding the Fountain of Youth be a blessing?

Prepare for sleep-deprived nights and skipped chores while repeating the phrase: "Just one more page."

“The Best writer in the Suspense & Thriller Genre today!”

“An exciting, addictive read from start to finish.”

“Have supplemental oxygen! You'll be breathless throughout this book!”

“Couldn’t put it down to go to sleep.”

“Very thrilling. As exciting as any in this genre.”

“If you like Lee Child and David Baldacci, give Tim Tigner a try.”

PIERCE DUBOIS bunched his beefy fists, attempting to mask his irritation. He was unaccustomed to discourtesy. Certainly not from people whose paychecks depended on his support. Certainly not after being summoned a thousand miles on Christmas Eve.

What couldn’t wait a few weeks until the quarterly meeting? Did the offending executives somehow sense what their angel investor had planned? Had they divined that he wanted to call it quits after seven disappointing years, to enter the new millennium free from past mistakes—and quarterly million-dollar payments? Could this power play be the CEO’s last grasp at dignity, at going out on her terms?

Pierce hoped he had it wrong. That they’d found another investor. Someone who’d keep the research progressing toward a possible payout. But as he sat there waiting for the tardy executives to arrive, he wasn’t holding his breath.

He shifted his gaze from the three empty chairs to the five faces that had gathered around the Silicon Valley conference room table. A table which, like everything else in the adjacent offices and laboratory, Pierce had paid for. Three bright-eyed scientists, an administrative assistant, and the CFO all sat quietly, studying papers and avoiding their investor’s eye.

Despite their cloaked responses and coy behavior, Pierce sensed suppressed energy in the room. Something was up and dammit they knew what it was. But they weren’t sharing.
Irritated by the petty game, he picked up his phone and called his driver—who was also his pilot. Pierce hadn’t become wealthy by wasting money. “We may be heading home momentarily. Be sure the plane’s ready.”

Yes, sir. Now that was a proper response. We don’t know where they are, but surely they’ll be here shortly, sounded infinitely less satisfying.

Punching off his phone, Pierce decided that he had never really cared for any of the Eos team. Their science, yes. He loved that. Their work ethic, fine. Seven of the eight were married to the job and only the job, so they put in the hours. But the lot of them were more sheep than wolf. Sure, Lisa Perera, the CEO, could show some tooth. And Felix Gentry, the CFO, occasionally displayed a full set of incisors. Neither, however, was a true carnivore. Neither was part of his pack.

Sounds of activity resonated from the outer office as Pierce picked at a pesky splinter in his left forefinger. A remnant of his last wood chopping workout. The commotion had to be coming from the missing execs. Eos Pharmaceuticals only had eight employees.

All heads turned toward the door as Lisa Perera and David Hume entered the conference room. She wore the confident countenance of the consummate CEO, but appeared more shaken than defiant. The Chief Scientific Officer was much less guarded. He wore a dazed stare and strode without his usual spring.

Neither apologized for being late.

Lisa sat at the end of the table opposite Pierce. David settled into one of the two empty chairs to her left. She took a deep breath and said, “We’ve just come from Kirsten Besanko’s house.”

All eyes turned toward the sole empty seat while Lisa continued. “She passed away this morning. Her husband found her in the pool when she didn’t come in for breakfast after her morning swim.”

Gasps erupted around the table.

Lisa answered the obvious question. “The paramedics aren’t sure what happened. Probably a stroke or heart attack.”

“She was only thirty-three,” Ries said.

“She was six-months pregnant,” Allison sobbed, adding, “she didn’t want anyone to know.”

Pierce saw shock register on a few faces—but not all. To him, the information was anything but surprising. It implied the answer. Pregnancy significantly increased the odds of having a stroke.
He didn’t mention the connection. He hadn’t flown all the way from northern Montana to talk about Kirsten. Best to move things along. “Why don’t we knock out this meeting so you can move on to personal matters? Lisa, you said we had something supremely important to discuss.”

The CEO struggled to pull herself together, taking a deep breath while momentarily closing her eyes. It was the first time Pierce had seen her anything but perky and polished.

With a photogenic face and an all-American fencer’s quick wits, Lisa Perera was more handsome than pretty. She had shoulder-length brown hair complemented by bright brown eyes and a smile that effectively camouflaged a computer-like brain. Pierce expected her to end up hosting a talk show—once her biotech career bombed.

“Yes, of course,” Lisa said, snapping herself back into form with a transformation that was both audible and visible. “Thank you for interrupting your holiday to join us on such short notice.”

Pierce decided to set the tone then and there. “You didn’t give me much choice on the phone. Or much information.”
“As I said, some messages really must be delivered in person. On that note, I’m going to pass the baton to David. He’s earned the honor.”

David Hume, MD, PhD, and CSO, was the reason Pierce had funded Eos Pharmaceuticals. When he invested, Pierce bet on people. Despite delivering disappointing results for seven consecutive years, the Chief Scientific Officer still struck Pierce as the smartest man he’d ever met.

David stepped up to the proverbial plate by lifting his head. As he prepared to speak, the fire reignited in his eyes. “It took forty-two more iterations than I would have liked, and nearly twice as many as I predicted when we first took your money, but forty-three proved to be the lucky number.”

Telomeres were like metal tips on the ends of DNA zippers. They kept the long strands from getting fouled up during the unzipping and re-zipping process at the core of cellular reproduction. When telomeres malfunctioned, people got cancer. When they wore down, people aged. By keeping telomeres in pristine condition, Eos—the name of both their product and their company—would act like the elixir of immortality.

At least in theory.

Pierce couldn’t believe his ears, even though he had been fantasizing about this moment for seven years. “What are you telling me?”

David’s enthusiastic gaze didn’t waver. “Without extensive, long-term clinical trials, I can’t be definitive. But at this point, and by all indications, we believe we can arrest human aging with two shots of Eos a year.”

“People won’t age a day after their first injection.”

Pierce found himself speechless, but quickly recovered. This was definitely too good to be true. “How confident are you in your findings?”

“Confident enough to start using it.” David gestured around the table. “All of us have.”

Pierce felt like they’d just attached jumper cables to his dreams. If David and the others believed in the safety and efficacy of Eos enough to use it on themselves, then they weren’t puffing him up as part of a pitch. When it came to science and safety, these were serious people. The leaders in their field. “I was only hoping for a slow-down. The ability to buy a few more years. Maybe a decade. You’re telling me you invented immortality?”

David raised a palm, but the other research scientists’ micro-expressions may as well have been nods. Ries, Eric and even Allison grew glows of pure pride. “No, far from it. People who take Eos can still die from any number of causes.”

“That’s what all our evidence indicates.”

Pierce found himself propelled to his feet by an irrepressible burst of energy. “Well, Merry Christmas! We’re about to become the richest people on the planet.”

His mind plowed forward as he paced. “If what you say is true, Eos is worth more than all the oil in Saudi Arabia. There’s nothing people won’t pay, and there’s nobody who won’t pay it. The big pharmaceutical companies will go nuts at auction. We’ll get hundreds of billions for the rights.” Pierce ran rough calculations as his lips and legs expelled excess energy. Expected purchase price. Anticipated royalty stream. His percentage ownership. He’d just become the wealthiest man alive—even if nobody knew it.

David raised his other palm, halting Pierce’s pacing. “There is one problem. We can’t sell it.”