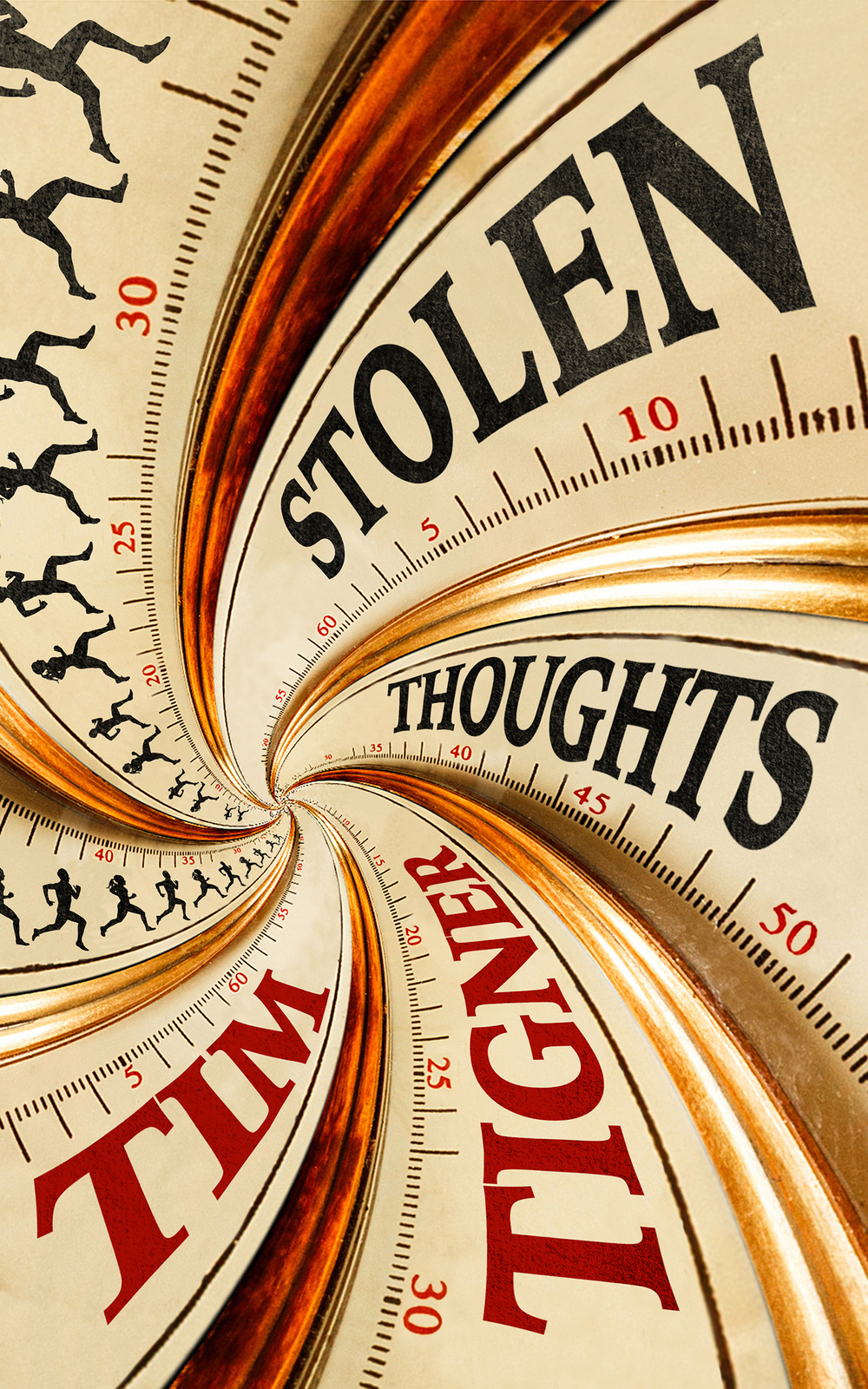 How would your life change …
if you could read another’s thoughts?
If you were the one …
to break the biological code?

There’s been a breakthrough on the campus of Caltech. A discovery. An invention. One so startling and surprisingly sinister that the inventor can’t tell a soul.

Designed to delight fans of The Price of Time (one of the 100 Most-Sold Books of 2019) and new readers alike, Stolen Thoughts is a thought provoking thriller readers will never forget.

Precariously poised at the center of the action is Victoria Pixler, a bioengineering student with a tragic past, a passionate quest, and a brilliant mind. After a decade of dedication, she’s just completed her life’s work only to have her dream shattered and her career terminated—by the least likely suspect. Meanwhile, propelling the thrills from the middle of the mystery is one of humanity’s great questions: Would the power to read minds be a blessing, or a curse?

Packed with enlightened anecdotes, amusing quips, and suspense that will rivet readers to their chairs, this novel delivers Tigner’s trademark fast-paced action and first-class intellectual intrigue—from characters you can’t forget.

Prepare for sleep-deprived nights and skipped chores while repeating the phrase: "Just one more page."

“The Best writer in the Suspense & Thriller Genre today!”

“An exciting, addictive read from start to finish.”

“Have supplemental oxygen! You'll be breathless throughout this book!”

“Couldn’t put it down to go to sleep.”

“Very thrilling. As exciting as any in this genre.”

“If you like Lee Child and David Baldacci, give Tim Tigner a try.”

VANCE PANZER was feeling lucky as he stepped from the casino’s ornate shopping esplanade into the psychic’s stylish studio. Thanks to Cassandra, he’d be leaving Las Vegas six-figures richer than when he’d arrived.

As a guy in possession of all his marbles, Vance had never visited a fortune teller before today. Therefore, Hollywood had framed his expectations for the office. He’d pictured black velvet curtains, astrology symbols, artificial candles, and tarot cards. Perhaps a bit of incense in the air and some mystical music softly setting the mood. What he found looked more like an exclusive resort. Fine furniture, gurgling fountains, tasteful artwork, and warm lighting.

The illusion that this was a five-star spa lasted only a few seconds. It collapsed when the receptionist stepped through an archway to greet him. The man looked like Hagrid from the Harry Potter movies. A super-sized guy in desperate need of a barber. Vance’s first thought was that Cassandra had chosen “Hagrid” for security reasons, but a quick appraisal dispelled that notion. Despite his dimensions and wild, reddish-brown hair, the kind, thoughtful look in his eyes made it clear that this guy was more Bambi than bear.

“You must be Walter White,” the receptionist said, extending a large hand. “I’m Chewie. Welcome to Consultations by Cassandra. Please follow me.”

“Like the Star Wars character?” Vance couldn’t help but ask as they rounded the corner into an intimate lounge.

“My given name is Quinten Bacca, which quickly evolved to Q-Bacca, then Chewbacca, and inevitably Chewie. Would you care for a drink?” He gestured toward a bar boasting top-shelf brands.

Vance was about to request a club soda when a gleaming automatic machine caught his eye. “I’d love an espresso.”

“Coming right up. Meanwhile, you can pick a number.” Chewie nodded toward an antique table covered with assorted carved hardwood boxes, colorful notepads, and fancy pens. The sign above it read Your session will be free if Cassandra can’t name the three-digit number you pen and place in the box of your choice.

Given that a twenty-five-minute session with Cassandra went for $1,000, that was quite an offer. Vance noted that the sign and display were positioned near the archway, making them visible from the Bellagio’s esplanade. A creative marketing gimmick, to be sure.

“How often does Cassandra guess wrong?” Vance asked while inspecting the small boxes.

“She doesn’t guess, so never.”

“Surely someone has outsmarted her? Perhaps by slipping in a piece of paper they prepared at home?”

Chewie grew a knowing smile. “Believe me, we’ve seen it all, and nothing matters. She reads your mind, not your paper.”

Vance knew that was not true. Nobody could genuinely read minds. Victoria Pixler, aka Cassandra, probably used advanced imaging technology to scan the box while the client was seated behind her crystal ball. Some system originally designed for airport screenings, he guessed.

Before replying, Vance studied the receptionist’s expression. Chewie appeared sincere, but that merely meant he wasn’t in on the trick. Cassandra had used her charm and cunning to bamboozle him the same way she did her customers—and Vance’s anonymous employer. “Trust me, she really can read your mind,” were the last words the man had spoken before slipping an envelope stuffed with money under the hotel suite door.

Vance had gone along, of course. His employer’s misguided conviction was undoubtedly what accounted for an offer that was exceedingly generous—given that Cassandra was deaf, a woman, and she accepted private appointments with strangers.

He nodded to Chewie. “I guess we’ll find out.”

Vance positioned himself in a concealing position, then penciled three light, minuscule parallel lines on a slip of paper such that they were barely visible. He folded the note in quarters and slid it into a rosewood box.

“You look determined,” Chewie said, handing over a steaming espresso.

“Well, you came to the best place in Vegas for that. Cassandra’s clients all leave as winners.”

As if on cue, the door to the studio swung open, making an ongoing conversation audible. “…can’t thank you enough. You’ve been incredibly helpful.”

“I feel like I should give you a hug. Would that be okay?”

A moment later, Vance watched an ebullient woman emerge from the reading room, walk out onto the casino’s colorful carpet, and disappear into the passing crowd. The spectacle was so perfect that it had to be an act. A routine performed prior to every initial reading to prime the emotional pump.
Vance turned to Chewie. “That happen often?”

“Nope. Clients rarely request a hug,” Chewie said deadpan before winking. “If there’s nothing else I can get you, I’m going to head back out front. Try to look directly at Cassandra when you speak so she can read your lips. She uses a voice-to-text app, but prefers to go old-school during readings. She’ll summon you in a minute.”

Cassandra emerged almost exactly sixty seconds later wearing a dark reddish-brown evening gown that gave her a simultaneously sexy yet sophisticated appearance. While striking, the formalwear seemed overkill until he remembered that she also did a daily show in one of the Bellagio’s theaters.

His focus shifted quickly from her outfit to her face, where it stuck for a second too long. She was a beautiful brunette, with lively hazel eyes framed by large stylish glasses, but it was her lips that drew his gaze. They were so plump and perfect yet innocent that he found himself transfixed.

“Mr. White. Welcome, please come in. Did you pick a number?”

“And you’re happy with it?”

Bewitched though he might be, Vance wasn’t about to fall for that trick and change it now with her watching. “I am.”

The reading room was considerably dimmer than the lounge, so the glowing crystal ball on the center of the round table drew his eyes as if they were magnetized. He took the designated seat and, with an inward grin, said, “Please, call me Walter.”

For a second, he froze like arctic ice as a chill shot down his spine. He had used a courier to pay in cash when booking his appointment, and now he was in deep disguise, with a wig, mustache, eyebrows, and makeup.

The explanation struck as he exhaled. A cutting-edge biometric recognition system! Probably one combining facial features with other inputs like skeletal dimensions and gait analysis. All tied to a computer that would rival those at NASA and the NSA. One that had crunched away while he sipped espresso in Cassandra’s lounge.

From that data point, Vance leapfrogged to the next obvious conclusion and the explanation for the psychic’s reputation. Her entire studio was an illusion. An intelligence hub camouflaged to resemble a five-star spa. A pit bull in poodle’s clothing.

“It’s okay,” Cassandra continued. “A lot of people give me pseudonyms—invented or borrowed. I understand and respect the desire for privacy in these circumstances, given the stigma surrounding my profession. But since my goal is to maximize the benefit you get from your session, I want to encourage honesty and acceptance. The sooner you shed your skepticism, the more time we’ll have to explore meaningful issues.”

Despite the allure of those lips, there was no chance of any genuine shedding or sharing taking place. Zero. Vance wasn’t one to ascribe seemingly unexplainable situations to supernatural causes. He was a science and technology guy—among other things. “I appreciate your understanding. I take my privacy very seriously. Speaking of which, are you recording this consultation?”

Cassandra’s reply was swift and sincere. “No. I would never do anything to violate the privacy of my customers or the bond of trust I consider sacred. Besides, reputation is everything in this business, so I’d be torpedoing my career if I did.”

“I’m pleased to hear that,” he said, studying her, the tablecloth between them, and the small soundproof studio.

“How may I help you, Vance? What brings you here today?” she asked, her gaze going to the crystal ball, as her hands gesticulated an invitation.

For a few seconds, he toyed with the idea of giving her an honest answer. Simply laying it on the line for pure shock value and the thrill of seeing that special look in her eyes and the quiver of those lips. I’ve come to slit your throat.