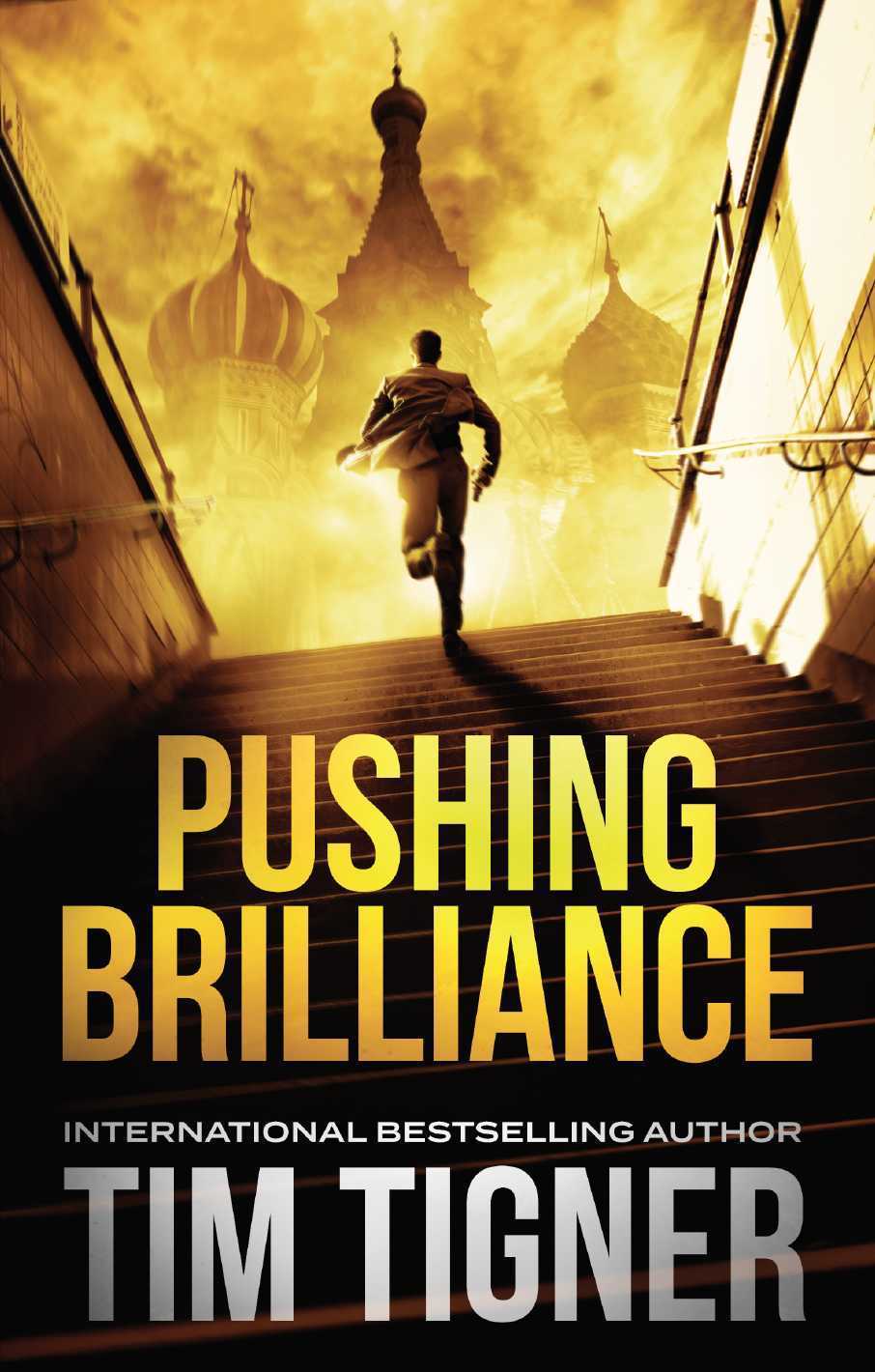 He didn't do it.
He really didn't.
But proving it,
will be a killer.

Framed for murder and on the run, former Olympic biathlete Kyle Achilles is also in the crosshairs of assassins' guns. Why? He has no idea. He's fighting blind against two master strategists and one extraordinary invention — known as Brillyanc.

Achilles' only ally is the other prime suspect, a beautiful Russian mathematician who is either the best or worst person to ever enter his life. Katya was engaged to Achilles' brother — before he died.

Chasing clues while dodging bullets, Achilles and Katya race around the globe, uncovering a conspiracy conceived in Moscow, born in Silicon Valley, and destined to demolish both the White House and the Kremlin. Along the way a lost soul finds purpose, a broken heart confronts forbidden love, and America gains a new hero.

Packed with heart-stopping surprises, paced by razor-sharp plotting, and populated with richly rendered characters, Pushing Brilliance will leave you breathless and longing for more.

"Reads like Reacher with a little Ludlum and Flynn mixed in."

"Achilles is right up there with Steve Berry's Cotton Malone and Brad Thor's Scot Harvath.”

"I can definitely see Achilles becoming a huge name in the thriller genre."

"Spectacular. Truly one of the best books I have ever read."

“I was even getting back out of bed to see what happened. "

"I couldn't wait to pick the book up again and read late into the night."

"At times I thought I was listenting to the next Jack Reacher novel."

THE LAST TIME Grigori Barsukov met the most powerful man in the world, they’d been living very different lives, and Vladimir had broken his nose. Although that was thirty years ago, the memory remained fresh, and Grigori’s nose still skewed to the right. Back then they’d both been wearing KGB lieutenant stars. Now they both wore the finest Italian suits, but his old roommate also sported the confidence of one who wielded unrivaled power, and the temper of a man ruthless enough to obtain it.

The world had spun around a different axis when they’d worked together, an east-west axis, running from Moscow to Washington. Now everything revolved around the West. America was the sole superpower.

Grigori could change that.

He could lever Russia back into a pole position.

But only if his old rival would risk joining him — way out on a limb.

As Grigori’s footfalls fell into cadence with the boots of his escorts, he coughed twice, attempting to relax the lump in his throat. It didn’t work. When the hardwood turned to red carpet, he willed his palms to stop sweating. They didn’t listen. Then the big double doors rose before him and it was too late to do anything but take a deep breath, and hope for the best.

The presidential guards each took a single step to the side, then opened their doors with crisp efficiency and a click of their heels. Ten meters before him, a gilded double-headed eagle peered down from atop the dark wood paneling, but the lone living occupant of the Kremlin’s inner sanctum did not look up.

Grigori stopped three steps in as the doors were closed behind him, unsure of the proper next move. He wondered if everyone felt this way the first time. Should he stand at attention until acknowledged? Take a seat by the wall?

He strolled to the nearest window, leaned his left shoulder up against the frame, and looked out at the Moscow River. Thirty seconds ticked by with nothing but the sound of shifting photos behind him. Was it possible that Korovin still held a grudge?

Desperate to break the ice without looking like a complete fool, he said, “This is much nicer than the view from our academy dorm room.”

Grigori felt his forehead tickle. Large drops of sweat were poised and ready to roll. As the first broke free, he heard the stack of photos being squared, and then at long last, the familiar voice. It posed a very unfamiliar question: “Ever see a crocodile catch a rabbit?”

Grigori whirled about to meet the Russian President’s gaze. “What?”

Korovin waved the stack of photos. His eyes were the same cornflower blue Grigori remembered, but their youthful verve had yielded to something darker. “I recently returned from Venezuela. Nicolas took me crocodile hunting. Of course, we didn’t have all day to spend on sport, so our guides cheated. They put rabbits on the riverbank, on the wide strip of dried mud between the water and the tall grass. Kind of like teeing up golf balls. Spaced them out so the critters couldn’t see each other and gave each its own pile of alfalfa while we watched in silence from an electric boat.” President Korovin gestured as he spoke, enjoying the telling of his tale, but keeping his eyes locked on Grigori throughout.

“Nicolas told me these rabbits were brought in special from the hill country, where they’d survived a thousand generations amidst foxes and coyotes. When you put them on the riverbank, however, they’re completely clueless. It’s not their turf, so they stay where they’re dropped, noses quivering, ears scanning, eating alfalfa and watching the wall of vegetation before them while crocodiles swim up silently from behind.

“The crocodiles were being fooled like the rabbits, of course. Eyes front, focused on food. Oblivious.” Korovin shook his head as though bewildered. “Evolution somehow turned a cold-blooded reptile into a warm white furball, but kept both of the creature’s brains the same. Hard to fathom. Anyway, the capture was quite a sight.

Grigori resisted the urge to swallow.

“When it comes to eating,” Korovin continued, “crocs are like storybook monsters. They swallow their food whole. Unlike their legless cousins, however, they want it dead first. So once they’ve trapped dinner in their maw, they drag it underwater to drown it. This means the rabbit is usually alive and uninjured in the croc’s mouth for a while — unsure what the hell just happened, but pretty damn certain it’s not good.”

The president leaned back in his chair, placing his feet on the desk and his hands behind his head. He was enjoying this.

“That’s when Nicolas had us shoot the crocs. After they clamped down around the rabbits, but before they dragged ‘em under. That became the goal, to get the rabbit back alive. Gave a new meaning to the phrase, catch and release.

“The trick was putting a bullet directly into the croc’s tiny brain, preferably the medulla oblongata, right there where the spine meets the skull. Otherwise the croc would thrash around or go under before you could get off the kill shot, and the rabbit was toast.

“It was good sport, and an experience worth replicating. But we don’t have crocodiles anywhere near Moscow, so I’ve been trying to come up with an equally engaging distraction for my honored guests. Any ideas?”

Grigori felt like he’d just been brought in from the hills. The story wasn’t helping the lump in his throat either. He managed to say, “Let me give it some thought.” Then, sensing what his host wanted, Grigori asked, “What happened to the rabbits?”

“Good question. I was curious to see that myself. I put my first survivor back on the riverbank beside a fresh pile of alfalfa. It ran for the tall grass as if I’d lit its tail on fire. That rabbit had learned life’s most important lesson.”

“Doesn’t matter where you are. Doesn’t matter if you’re a crocodile or a rabbit. You best look around, because you’re never safe.

“Now, what have you brought me, Grigori?”

Grigori breathed deeply, forcing the reptiles from his mind. He pictured his future atop a corporate tower, an oligarch on a golden throne. Then he spoke with all the gravitas of a wedding vow. “I brought you a plan, Mister President.”