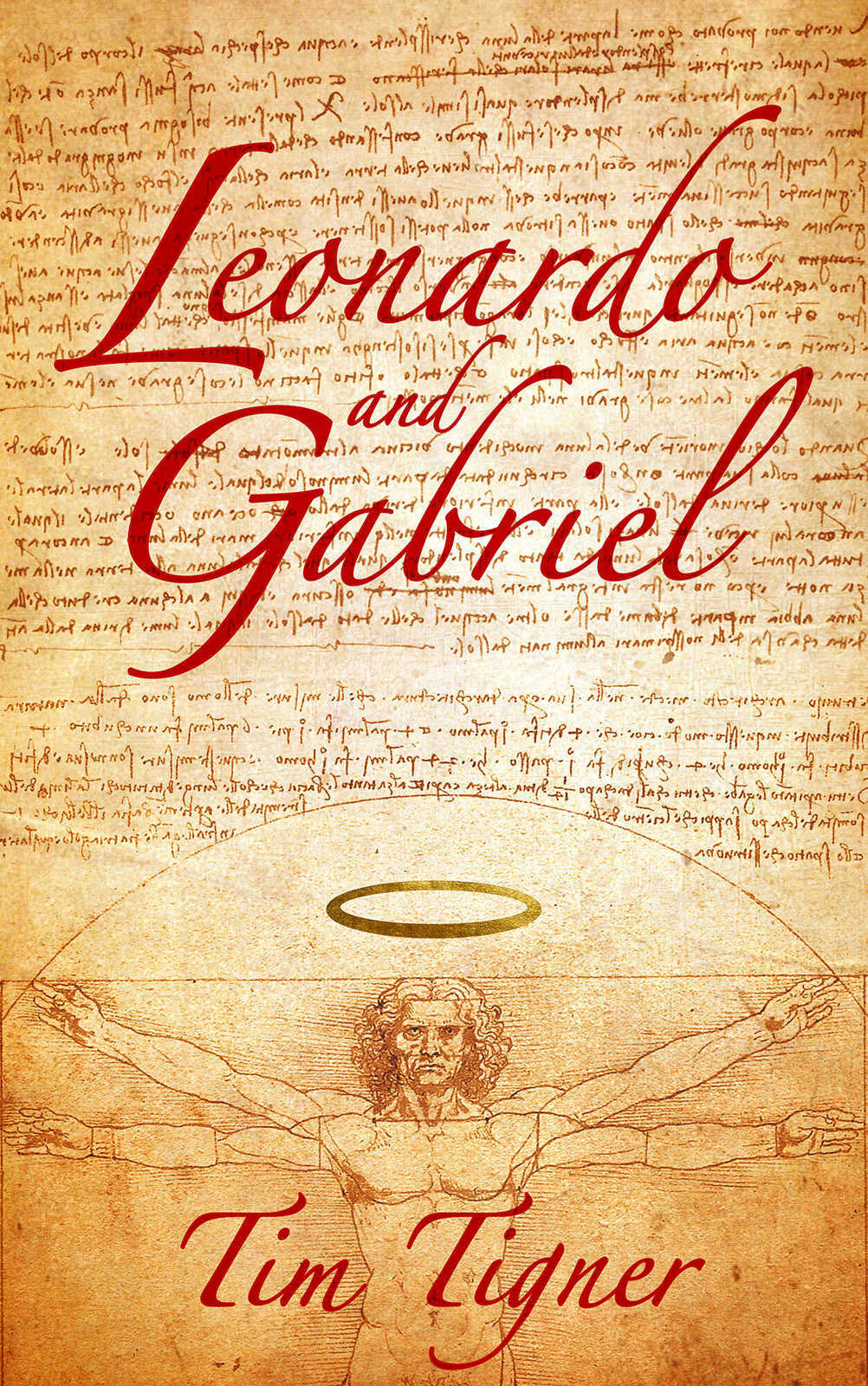 Leonardo Da Vinci has a problem.
A serious problem.
The soul-wrenching kind.
The career killing kind.
He needs to finish a piece for the Pope—but doesn't know how.

Alas, figuring it out is no trivial task. In fact, nobody ever has.

Of all the great and grand quests that humans have undertaken, none has been more attempted or elusive than gaining a comprehensive grasp of God. When seeking to know Him with the head rather than the heart, to rely on reason rather than faith, the obstacles appear insurmountable.

If He is all powerful, and we are His children, why do so many suffer so horribly? Why would He punish people who don’t believe in Him? Why haven’t we seen or heard from Him for thousands of years?

Join Leonardo and the Archangel Gabriel as they survey and surmount these stumbling blocks. Listen in as Gabriel reveals why obvious answers remain obscured. Follow along as he leads Leonardo all the way to an intuitive understanding of the Almighty.

Set during Da Vinci’s struggle to give God a face in his masterpiece, The Last Supper, Leonardo and Gabriel is no less entertaining than it is educational. Although the framework is historically accurate, the conclusions of this original work are as unpredictable as they are compelling. Engage with an open mind—as Gabriel counsels Leonardo to do—and it may even change your life.
⎯⎯⎯⎯⎯⎯⎯⎯⎯⎯⎯⎯⎯⎯⎯⎯⎯⎯⎯

Do you like logic puzzles? Pondering big philosophical questions? Are you open-minded and eager to learn life-improving lessons? Then this book’s for you.

On the other hand, if you prefer to sit in the pews, repeating along while scripture is passionately delivered from the pulpit, then you should probably pass on this one.
⎯⎯⎯⎯⎯⎯⎯⎯⎯⎯⎯⎯⎯⎯⎯⎯⎯⎯⎯

1) This novella is considerably shorter than the author’s novels. The price reflects the caliber of the content, not the page count, and was selected to discourage impetuous purchase.

2) This is essentially an entertaining self-help book, a philosophy text that reads like a thriller. It is intended to stimulate life-improving thought and adequately answer one of history’s most perplexing questions by creatively presenting original analysis on an important topic that touches us all.

"The most thought provoking novel I have ever read.”

"a must read. Take the journey. It will open your Mind!”

"A workout for mind and soul”

“Should be required reading for all philosophy students.”

“A Stroke of Genius.”

“Thirsty for knowledge? This is THE book.”

“I have never read a book as tought provoking!”

The Dining Room of the Convent of Santa Maria delle Grazie
Milan, Italy

Leonardo Da Vinci was living a lie. It tormented him day and night.

For the first forty-six years of his life, he had chosen to ignore the war raging in his head. Alas, the ostrich approach was no longer an option.

Not with the battle but inches from his face.

He set a paintbrush upon the scaffolding and cracked his knuckles, one after the other. He’d been holding his favored brush for hours—without making a single stroke. Such introspective stints should not be problematic, but they were.

Although the sessions spent in contemplation were often Leonardo’s most productive, generating the insights that elevated his artwork, the Prior presiding over his project was not convinced. In Gioffre’s monastic world, idle hands were the devil’s workshop.

Truth be told, on this particular occasion Prior Gioffre had a point. Leonardo had made no progress today. Despite giving the problem his full focus, he remained stumped and indecisive.

“You’ve been summoned by the duke.”

The words shattered da Vinci’s concentration like a rock through a window. After his senses regained their balance, Leonardo saw that Francesco had joined him on the scaffolding. “What does Sforza want?”

Leonardo’s assistant gave a slight shrug. “Do you think he’d tell me?”

Of course he wouldn’t.

The Duke of Milan, Ludovico Sforza, employed tens of thousands of men. He was a man of great power, pride, and prestige. He would not deign to confide in underlings.
Nor would he react kindly to being kept waiting. The man who paid the bills rarely did.

Leonardo found the duke in the courtyard of the royal residence at Castle Sforza. This was a welcome stroke of luck. Leonardo had designed the playful fountains that were its focal point. Delighting visitors young and old, the waterworks were a source of pride for Ludovico—and a constant reminder of Leonardo’s genius.

Had the weather not been so temperate, they might be meeting in the Sala delle Asse. That venue would have been considerably less propitious, for Leonardo was well behind schedule in painting its ceiling. The challenge he faced with Sforza’s fresco was entirely different from that of his current endeavor. The vegetable motifs the duke had requested were boring, and boring always ranked last on Leonardo’s want-to-do list.

While he waited for his turn before the big chair, Leonardo’s thoughts returned to the tormenting task he’d just abandoned. For three years, he had been faithfully planning and painting the climactic scene from the four gospels. The Last Supper. He was capturing the moment just after Jesus revealed that one of the twelve disciples at the table would betray him.

The enormous mural that covered an entire wall of the dining room was almost finished.

Alas, they were the most important. The focal points that everyone entering the room was sure to study. The centers of energy and emotion. The faces of Judas and Jesus.

The latter was the source of Leonardo’s torment.

Not the artistry involved in painting the son of God, but the hypocrisy.

Try as he might, Leonardo could not convince himself to truly believe in the God of the Bible. He couldn’t reconcile the picture preached in Scripture with the suffering he saw. Therefore, he couldn’t imbue his artwork with the authenticity it deserved.

How could the Almighty possibly permit the innocent to endure so much misery? Leonardo knew no benevolent father who would allow his children to suffer.

Leonardo’s faith also snagged on the children part. Scripture says God so loved the world, that he gave his only begotten Son. But weren’t we all supposed to be His children?

As Leonardo stared at the space that should already contain the holy face, he again attempted to find a way forward. There were only three options. One, ignore the problem. This was the alternative he absolutely dreaded, for it would make his masterpiece imperfect. Two, embrace faith. The irony of that solution was not lost on Leonardo. To embrace faith, he would need to forsake his greatest God-given ability. His reason. Or three, reconcile faith with reason. This was by far his favored approach, but he did not hold out hope. The great philosophers had all failed to square that circle.

Nonetheless, Leonardo found his torment exacerbated by the constant feeling that he was close to finding that philosophical path. On the verge of grasping something that Aristotle, Augustine and Aquinas had all missed. A grand unifying insight that could reconcile faith with reason. Some—

Da Vinci looked up to see Duke Sforza standing before him. His Grace was garbed in a rose-colored cloak resembling Leonardo’s own, but stitched with silver and buttoned with gold.

Despite their similar age and dress, Sforza projected a presence entirely different from Leonardo’s. He presented an air of power accented by a hint of danger. This was an image his voice reinforced. “It’s a double-edged sword, that mighty intellect of yours. I sense that it rarely allows you a peaceful respite.”

“You wanted to see me, Your Grace?”

“Yes, and I suspect that you know why. Prior Gioffre called on me earlier. He’s not a happy monk. He has arranged for King Charles VIII to take mass at Santa Maria delle Grazie during his visit to Milan this weekend. Needless to say, such an honor would pay dividends for a generation to come. But Gioffre insists you have put the privilege in jeopardy by failing to finish the very mural that has attracted His Majesty.”

Leonardo began to speak, but Sforza held up a hand.

“Gioffre also tells me that yesterday you spent twelve hours staring at the painting without so much as lifting your brush. He said that’s not the first time you have indulged in idleness. He added that you have also been spending an inordinate amount of time in the ghetto entertaining drunkards while your work goes unfinished. Is that true?”

Leonardo had lifted his brush, but knew better than to quibble over semantics. “In essence, it is true. But in both instances, I was working. Smearing pigment is the easy part, My Lord. Knowing precisely what to paint is the challenge.”

“And for this you are gaining guidance from the ghetto? I fail to find the connection.”

“Where better to behold the face of a Judas than among the thieves and criminals?” Leonardo asked.

Sforza shook his head. “And Jesus. Are you seeking Him in the slums?”

Leonardo was not about to reveal the true source of that dilemma. “Inspiration comes from strange places, My Lord.”

“Good. You better get back to it then.”

“But first, tell me one thing. When do you intend to finish my ceiling?”

"I loved this novella. It is the most intelligent novel I've read."