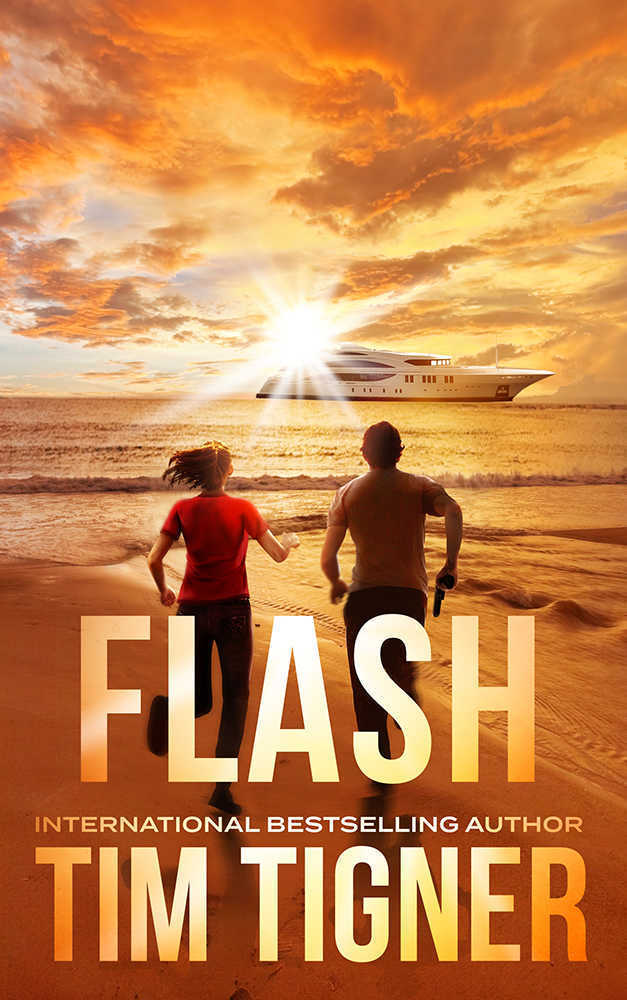 They woke up in the trunk of a car,
with no idea where there were,
or why,
or when.

Two blood-spattered strangers awake locked in the trunk of a car — with a murdered cop and the smoking gun. Aside from raging headaches and no idea what has happened they appear to have nothing in common. Troy thinks it’s 2001 and he’s still a combat surgeon fighting terrorists in Afghanistan. Emmy believes it’s 2002 and she’s still grifting a living from the streets of L.A.

Are they archenemies or coconspirators? Lovers or friends? What the hell are they doing in the Caribbean? And why is a Croatian assassin determined to kill them? The only thing they do know for certain is that they’ll be spending the rest of their lives in prison if the police catch them before they uncover the truth.

“An extraordinary thriller with everything readers love.”

“with the thrill of Vince Flynn and the craft of Daniel Silva, Tim Tigner is all Tim. Wow!”

"I like this author!! I enjoy his sense of humor, his characters and his style."

"I usually read myself to sleep but this kept me up all night!"

"flat-out hard to put down! FLASH is brilliant."

"Kept me turning pages until the sun came up."

“Not a moment goes by when readers won’t be shocked, surprised and entertained.”

“The same caliber and style as Flynn, Thor and Baldacci -- Fantastic!”

“Flash is fast-paced and mysterious and highly recommended.”

Troy awoke to the sound of screaming. That was not unusual for a combat surgeon, but hearing soprano was.

He opened his eyes to utter blackness and a monster headache. What the hell was going on? His memory was failing him and he felt oddly unsure of … anything.

He self-diagnosed a concussion, but sensed that it was the least of his woes.

This premonition proved correct a moment later when he tried to sit up—but could not. A cold steel ceiling pressed down on his left shoulder. He also felt walls abutting his back, head and feet. As Troy strained to wrap his mind around his baffling predicament, his nose upped the ante.

He was lying in a pool of blood.

Troy knew that this was the moment most people would begin to scream and flail, their fight and flight reflexes tripping all over one another. He remained motionless. Analyzing. He had learned at a very young age the wisdom of lying low and keeping quiet. In orphanages things had usually worked out better that way. In the army they still did.

He reached a steady hand into the darkness before him. Cool flesh met his bloody fingers just inches from his face. He had found the bleeder—or at least one of them. He checked the flabby neck for a pulse just to be sure. Definitely dead. “Better and better,” Troy whispered to himself.

Another soprano salvo erupted from the darkness, making his heartstrings resonate. Those were not wails of pain he realized, but cries of fear.

“Hold on! I’m coming,” he shouted back. Troy did not know if he was coming, of course. Aside from being boxed up with a corpse he had no idea where he was or how to get out. But he knew that hope had a power all its own. Best to offer it for now and figure the rest out later.

The screaming stopped. Then the box shook with a familiar rhythm. The motion snapped the puzzle pieces into place. He was in the trunk of a car.

The sound of an opening car door confirmed his hypothesis.

“Who said that?” A woman asked, her voice soft but clear.

Troy stifled his habitual Captain Troy response, giving his alternative title instead. “Doctor Troy. I’m in the trunk. Are you in danger?”

“I’m not at a party. What are you doing in there?”

For a dumb question, that was a really good one. “I have absolutely no idea. Ask the Taliban. But please let me out first.”

The woman remained silent for what seemed an eternity. He appreciated her dilemma. Curtain A or curtain B; the proverbial lady or the tiger. Picturing her trying to decide, he realized that if he got lucky and she pulled the trunk release rather than running off, his appearance might send her over the edge. He would look more like a feasting vampire than a valiant knight as he leapt to her rescue. Granted, she did not seem to be expecting a fairytale moment, but he decided not to risk it and added, “Don’t be scared by what you see.”

More silence ended with a cautious, “What do you mean?”

“I’m not at my best. I’m really much more charming than my present appearance might suggest.”

The car jiggled some more and then the trunk sprang open with a thwang and a woosh. Brave woman, Troy thought, scrambling to climb out before she caught sight of the corpse.

Freeze was a command one quickly learned to respect when working in a country rife with landmines. Troy turned his muscles to stone, but shifted his eyes toward the source of the command. What he saw both pleased and disappointed him. A petite beauty stood by the passenger door, knees bent slightly in a classic shooter’s stance, revolver leering at him from between two steady hands. She wore a white blouse, pink shorts, and white tennis shoes—all spattered with blood. Definitely not Taliban, but hardly Cinderella either.

They were in the corner of a parking garage illuminated only by emergency lighting. As he raised his hands up slowly over his head, Troy scanned the shadows cast by concrete pillars and parked cars. They appeared to be alone.

She stared at him in silence.

He stared right back at her. It was not unpleasant. She was short, and slender everywhere a woman was supposed to be, while generously rounded on top. He was not sure how his mind could focus on attributes like that at a time like this, but it did and he was glad for it. Stop to smell the roses and all that.

She spoke at last. “You’re all covered in blood.”

“You noticed that too,” Troy said. “But then it appears that you use the same designer.”

She did not look down at herself. No doubt the sight of her blood-spattered blouse was what had initially sparked her screams.

Troy did look down in an attempt to appear less threatening only to find himself out of uniform. That was odd, but not his chief concern. Priority number one was pacifying the pixie with the gun pointed at his chest. Hardware aside, she did not look like a killer, but then mental illness could be a master of disguise. Looking back up he said, “It’s not my blood,” and motioned toward the trunk with his head. “Speaking of which, would you mind putting your finger outside the trigger guard?”

Tinkerbell craned her long neck to glance into the trunk but then looked quickly away. “What happened? Who is he?” She asked, her arms starting to tremble. Her finger still on the trigger.

“I’m a bit curious about that myself,” Troy said, deciding to focus on the latter question first. “His uniform looks a bit like Marine dress blues, less the jacket. But he’s much too … squishy to be a jarhead, and that’s not the Marine crest on his shoulder boards. Mind if I take a closer look? We’ve been sleeping together and I don’t even know his name.”

“Sounds like you’ve got my headache,” Troy replied. “I woke up with a real humdinger.”

His comment mollified her expression. “Me too,” she said. Then she beckoned with the gun. “Go ahead and have a look.”

Troy pivoted back toward the trunk and went to work. The shoulder joint creaked as he moved the corpse’s arm out of the way, indicating that rigor was setting. Troy knew that meant he’d been dead for three to four hours. Nice to have a timeline. For the moment he had little else.

“As in British empire. A number of those former colonies are part of the coalition.”

Her look did not telegraph comprehension, but Troy returned to the search anyway.

Evan was not wearing his utility belt, so he had no handcuffs, nightstick, or phone. Troy could guess where his handgun was—as well as two of its bullets. Still concerned about the possibility of experiencing the third, he kept his movements slow and steady before the woman.

He slid his hand gingerly into Evan’s front right pocket and pulled out a set of car keys—Fords, like the car. Next he reached around and pulled Evan’s wallet from his back pocket. He flipped it open and read from the identification card. “Detective Sergeant Evan Johnson, Royal Cayman Islands Police. Boy is this guy a long way from home.” Troy realized the obvious as he spoke. “But then, so are we I suppose.”

“What do you mean, we’re a long way from home?” Tinkerbell asked.

Troy turned back toward her. “Judging by your alabaster skin, green eyes, and state of dress, I’m guessing you weren’t born in Afghanistan.”

“What does Afghanistan have to do with anything?”

The look of sincere confusion on her face gave Troy pause. “Where do you think we are?”

“As in Los Angeles?”

Troy felt his stomach begin to constrict. He reached for his own billfold but found his pockets empty. He reopened Evan’s wallet and pulled four bills and a receipt from the main compartment. The bills were twenty-Cayman-dollar notes.

He took a step back to study the other cars in the garage. All had RCIP logos and right-side steering wheels. Strike two.

His stomach shrank to the size of a walnut.

“What is it?” The woman asked.

Troy ignored her and turned his attention to Evan’s petrol receipt. Between juvenile detention and foreign tours, medical school and war, Troy had encountered some of the worst humanity had to offer. Nothing he’d seen had shaken him like the flimsy piece of paper he now held in his hand.

The woman spoke again, but all Troy heard was fuzzy background noise.

Not wanting to believe his eyes, he retrieved Evan’s identity card in hopes of finding contrary information. Confirmation greeted him instead. Strike three.

Feeling dizzy, he turned his attention back to the petrol receipt. He mouthed the words as if testing to see if they were real. Thirty liters, forty-eight Cayman dollars, September third, two thousand … eight.

He had not just forgotten the last few hours.

He was missing seven years.

"A nonstop thriller with humor."