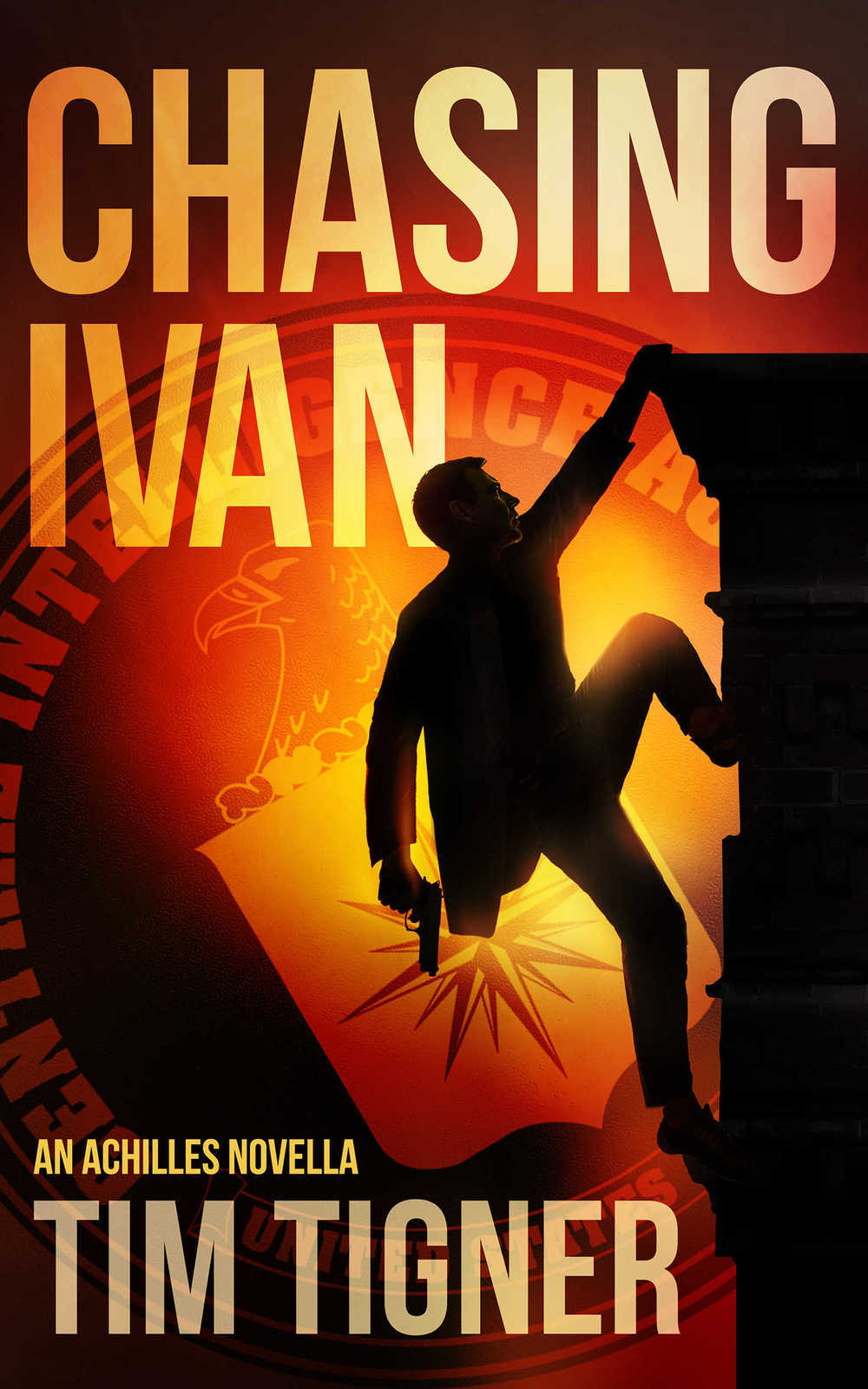 And then there's poor Emily

Rumor has it there’s a Russian you can turn to if you’re very rich, and need dirty deeds done without a trace. The CIA calls him Ivan the Ghost because he’s operated for years without leaving a trail or revealing his face.

For the first time in history, Ivan appears to have slipped. The CIA’s new director sets Agent Kyle Achilles on an intercept course, surveilling the daughter of a British politician. Then Ivan pulls off a masterful con, and Emily vanishes.

With Emily’s life, his career, and America’s reputation at stake, Achilles partners with an unlikely new agent he meets in France. Together they attempt to get one step ahead of the legendary Russian, while rubbing elbows with the ultra-rich in a high-tech international chase.

“Wow! Jack Reacher move over, Kyle Achilles is on the job."

"Tim Tigner is fast becoming one of my all time favorites."

"I loved this novella.  It started out fast and never stopped."

"Easy to read, and hard to put down."

“A powerfully addictive story by an exciting new author."

“Fans of Ludlum and Lee Child will delight at the magical web Tim Tigner weaves."

"One helluva start to a fresh new series."

"I love a good spy novel, and this is a spectacular one."

"a page turner comparable to my favorite Vince Flynn books."

I LOVE CLIMBING. Give me a cliff face and a bag of climbing chalk and I’ll be whistling all the way to the top.

But I had no chalk today.

No cliff face either.

I was 200 feet up one of London’s famous residential towers, clinging to the weathered stone in a dove gray business suit.

For the last eight weeks, I’d been tailing a couple of people while waiting for a legend to strike. That legend was a Russian criminal mastermind known as Ivan the Ghost, a man so skilled in the art of invisibility, his very existence was in doubt.

The CIA’s new director had learned that Ivan was planning to rig the upcoming London mayoral election by forcing the leading candidate to withdraw. Director Rider was eager to exploit this rare intelligence coup to score political points and eliminate Ivan. Permanently and covertly. That was where I came in, as a member of the CIA’s Special Operations Group.

Ivan didn’t use guns or gangsters, and he never left a trail or trace. He concocted elaborate schemes — traps that caught his victims unaware and kept them silent. Creative coercions and invisible operations were his trademarks, his sources of pride and fame.

We expected Ivan to strike at the mayoral candidate through one of two relatives, either his daughter Emily, or his brother Evan. But that was just a guess. Still, we were thrilled that for once, for the first time, we just might be one step ahead of The Ghost.

“Have you got eyes on him yet?” Oscar asked.

Oscar Pincus, my control back at Langley, was sporadically monitoring the situation via my earpiece. Oscar had just joined the Agency. A pet placed in a plum role by a new director more concerned with influence than competence.

Oscar and I had both become excited when our electronic surveillance picked up Evan lying to his office manager about an appointment we knew he didn’t have. Our hearts really started racing when he slipped away to an apartment on the nineteenth floor of the luxury residence to which I now clung. Our hope and expectation was that his clandestine meeting was part of a cleverly construed trap arranged by Ivan. “I made it up to nineteen. Now I just have to climb over to unit B.”

“So that’s a no. Ivan’s finally about to strike, and we’re blind.”

I didn’t reply. I didn’t have time for Oscar right now. My current position was more than physically precarious. The British government didn’t know I was here. In fact, I’d be screwed if they found out. Indoctrination into the SOG came with the warning that the US government will disavow agents to avoid embarrassment.

It’s the grown-up equivalent to shrugging. But then that’s politics, which resembles espionage, in that it revolves around lies. The difference, incidentally, is that spies don’t smile while lying.

I got a grip on the rail of the nineteenth-floor balcony, and began sliding left, hand to hand. I kept my legs raised out to the side as I went. That way, the residents of the eighteenth floor wouldn’t see them dangling while enjoying the view over afternoon tea.

It was a clear day, so from that altitude I could see the city skyscrapers to the south, and the sun reflecting off The Regent’s Park boating lake to the west. Theoretically, that meant millions of people could see me as well. Good thing I was wearing gray.

With forty meters to cover and not a second to spare, my hands slipped into a familiar climbing rhythm. Quick but cautious. As a free-solo enthusiast, I was used to climbing without ropes or tools. The business suit, however, was working against me. It bottled in heat, which brought on the enemy. It wasn’t only job interviews where sweaty palms could be deadly.

I’d just rounded the corner when crescendoing screams from the balcony below shattered the still air. “Oh my God! Oh my God! Oh my God! William! William!” Looking down as my heart regained its normal rhythm, I saw that the afternoon sun had cast my shadow in the wrong place at the wrong time. A silver-haired woman stared back at me, her mouth agape and her eyes bugged wide, watering the floor rather than her geraniums.

I always tried to smile in the face of adversity. In this case the smile was literal. “It’s okay, luv,” I said, invoking a gentlemanly British accent. “I slipped, but caught myself.”

I pulled myself up onto the balcony above her with a couple of quick, fluid moves, and then peered back over to reassure her. “No worries. I’m quite safe now, luv.”

As I ducked back, I heard her speaking to somebody. Then an elderly male voice said, “I’m calling the police.”

Bloody hell. The response time to an intruder alert at a posh place like this would be minutes.

I dropped to the balcony floor and began a rapid low-crawl toward unit 19-B. Looking over my right shoulder through the glass wall of the flat I’d just invaded, I spotted a pigtailed girl playing with colorful figurines.

She was seated facing the kitchen, where her mother was busy chopping vegetables. If her mom looked up, the police would get another frantic call and I’d likely end up playing aerial hide-and-seek with a helicopter.

I made it to the wall that separated my current location from Evan’s without drawing her eye. While that was good news, the barrier before me was not. The architect had made it virtually impossible for even the bold and the brave to use the balconies to hop between flats.

I was going to have to go back over the rail and shimmy along the edge again. But I’d have to do it between floors nineteen and twenty this time since the couple on eighteen was likely watching their window, anxiously anticipating more excitement.

Still praying that the girl’s mother wouldn’t look up from her knife, I climbed onto the balcony rail, braced myself with my left hand against the wall, and mapped out my jump. To reach the lip of the balcony above, I was going to have to spring up about two feet and back about one.

The vertical jeopardy that jump presented would paralyze most people, but competitive climbers are a different breed. We’re born with the ability to disconnect the acrophobia circuit and operate in the air as if on the ground. Put another way, a jump from a ledge is just a jump, if one doesn’t think about the drop.

I gave my palms a good wipe on my thighs. Then I crouched down, breathed deep, and rocketed up, my arms swinging into it and adding momentum as my legs exploded and my eyes locked on target.

Oscar’s voice sounded in my ear. “Whom were you talking to?”

The jolt knocked me off balance, just a bit, but enough that correcting it cost me power. My grasp came up a quarter-inch short of the ornamental lip, with my fingertips barely grazing its edge.

Now I was thinking about that drop.

As my upward momentum began the rapid transition to a downward plummet, I seesawed my shoulders, thrusting my right arm up while dipping my left. This practiced move added precisely two-and-a-quarter inches to my extension, enough to get the last digit of two fingers over the lip in time. The moment they touched, I cleared my mind of all other thought. I became those two fingertips, rooting in and holding fast. I remained in that meditative state until the rest of my body stabilized like a coat hanging from a hook. Then, with a slow and steady exhale, I brought my thumb up to crimp the hold, and pulled my left arm up beside its twin.

“Hold on, Oscar,” I said, hoping he’d appreciate the need for my focus to be elsewhere.

That wasn’t a given.

Oscar had about as much experience in the field as I had managing public relations. Zero.

After a couple of deep breaths, I resumed the hand-to-hand swinging shuffle toward 19-B, still focusing on my fingers but with my ears also primed for the sound of sirens. A few seconds later, I swung my legs forward and dropped onto the proper balcony, relieved and ready for more conventional action.

A fortuitous gap in the bedroom’s beige curtains beckoned, and I advanced with caution. I peered through at waist-level and saw them immediately. Evan and his secret date were naked on the bed.

Even in her state of undress, I had no problem identifying the petite redhead. Sarah Simms was a weather girl at one of the local TV stations.

This wasn’t Ivan’s trap. There was no leverage here. Evan was divorced, and Sarah had just appeared on one of the social rags’ Most Eligible lists.

“False alarm,” I said to Oscar.

“Not a teenage boy?” Oscar asked.

“I can’t be certain without breaching, but I think we can assume that Evan is purely testosterone driven. She’s hot. A local weather girl.”

“I dated a weather girl once,” Oscar said.

As he continued with a sexual pun, my phone vibrated an alert. I heard a simultaneous beep on Oscar’s end. “What is it?” I asked him.

“Tonight’s the night of Emily’s big date, right? Her first encounter with the mysterious Andreas she won’t stop talking about?”

"This book was fabulous. Such a delightful surprise."