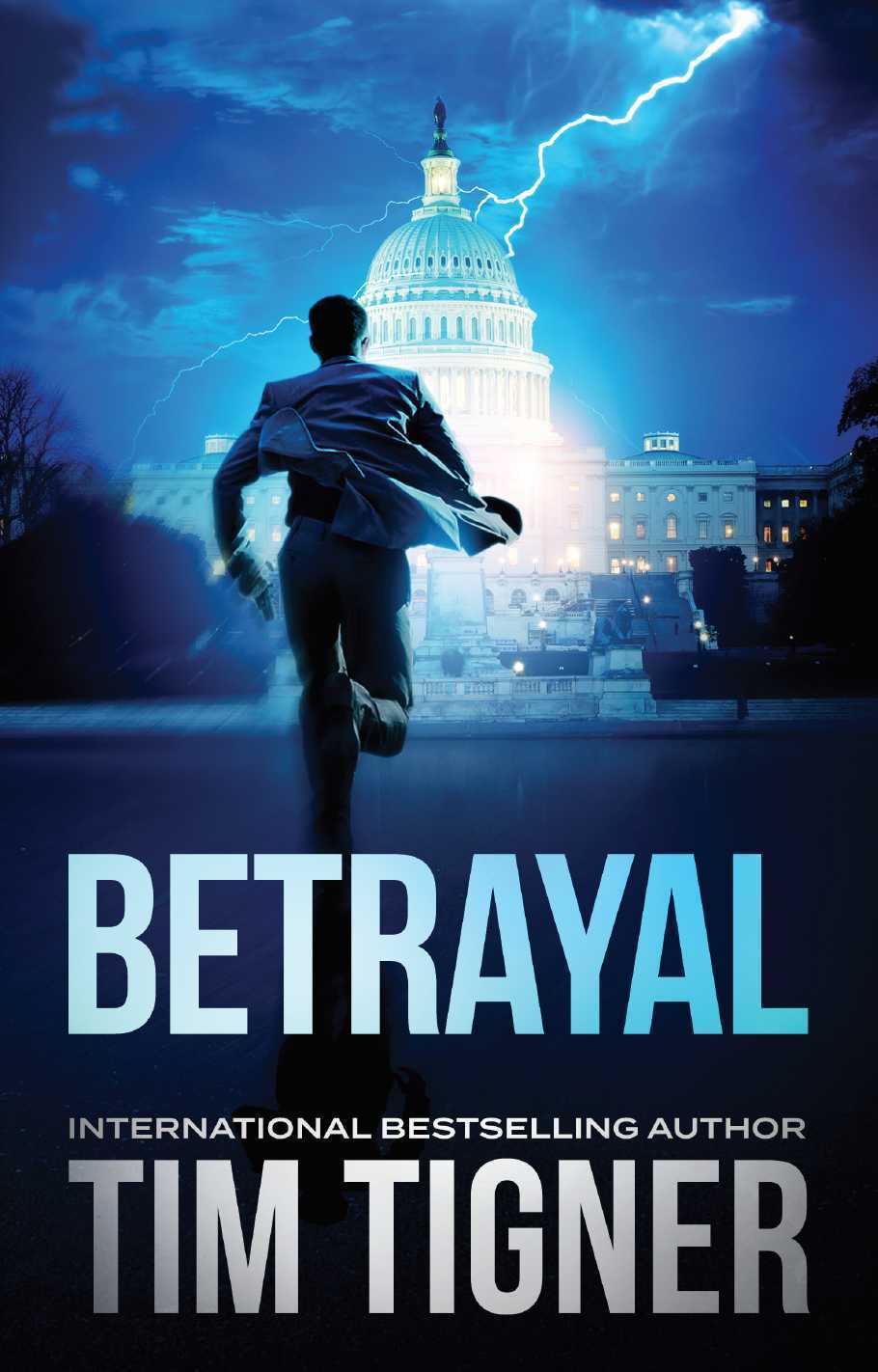 It started as an experiment.
It ended with an invention.
He never intended to use it.
But then they betrayed him.

Presumed dead after a staged terrorist attack, FBI Agent Odysseus Carr is running for his life with the doctor who rescued him. Meanwhile, the same power players who sent Odi to his death are now manipulating an FBI profiler into blindly tracking him down. She’s not just their best, she’s also his sister.

As Odi unravels a devious plot of profound political manipulation and global consequence, the hunted becomes the hunter, and the real terror begins.

“Tim Tigner is a masterful storyteller with a nose for intrigue and a careful eye for historical detail."

"As good as anything I've read from other thriller legends such as Tom Clancy."

“one of those writers you immediately want to tell your book clubs about.”

“An absolute must read for fans of Lee ChilD."

“The very definition of a page turner."

“If you like Flynn, Thor or Taylor, you'll love this book!!!"

FBI DIRECTOR WILEY PROFITT set his wineglass down a little too quickly. A drop of blood red wine sloshed out onto the virgin white tablecloth, spreading with ominous portent. He was more nervous than he realized. He picked the glass back up and took another sip before locking his lover’s gaze. “How would you like to be First Lady?”

“Of the United States?”

She instantly picked up on his mirth and mirrored it. “Does the Director of the FBI know something about Anna Beth Carver that the rest of us mortals have yet to learn?”

She leaned toward him conspiratorially. “The First Lady is having an affair with the Vice President?”

Wiley shook his head. For six months he had kept his earthshaking secret, neither hinting at the future that awaited them nor alluding to his secret pact. It felt great to share the big news with Cassi at last. He decided to start with the background, give her excitement time to build. “Dish has a health condition. He won’t be joining Carver on the reelection ticket.”

“I see,” Cassi said, clearly not believing him but apparently willing to play along. Her eyes twinkled. “So how does that make me First Lady?”

“It doesn’t,” he said, shaking his head as she feigned disappointment. “You’re going to have to wait five years for that. In the meantime, it makes you Second Lady—come a year from January anyway.”

Wiley saw a flash of confusion cross Cassi’s brow. She appeared unsure if he was being goofy or serious. “Dish really is sick? Carver really asked you to join him on the ticket?”

“Yes and no,” Wiley said. “Yes, Dish really is sick. And no, President Carver has not asked me to be his running mate—not yet. But he will.”

Wiley leaned forward so that his lips were an inch from Cassi’s ear. He paused there to inhale her sweet perfume before whispering the prophecy. She was wearing a new scent. “Because terrorism is going to top the American agenda.”

She pulled back, sobered by his words. Her parents, after all, had died on 9/11. “You really are expecting an attack?”

“I am. You know all those homeland-defense speeches I’ve been giving of late …?”

Cassi took a moment to chew on that one. He watched the gears spinning frantically behind her worried brow. “Maybe at one level they weren’t” she finally said, thinking out loud. “But nonetheless, it is because of those speeches that you think Carver will put you on the ticket. They were what earned you the Antiterrorist Czar epithet.”

Wiley raised his wine glass in a toast. “To your deductive powers.”

Cassi returned the gesture, but he could see that her mind was still focused on working through the implications of his revelation. When she looked up at him wide-eyed, he knew that the other shoe had dropped.

“I’ll be Second Lady?” She asked, her voice a choked whisper.
Wiley tried to smile but his lips would not move. He tried to nod but couldn’t. Panic gripped him like a cold iron glove. He could not move his head.

As he struggled, Cassi continued, blissfully unaware. “Are you asking me to marry you?”

Wiley’s eyes bulged in horror as the dark shadow over him shifted in silence. A prickly lump filled his throat as a muscled arm drew back. Fully awake now, Wiley strained to pierce the darkness, searching for the glint of the knife that would complete the picture and end his life. All he saw were fuzzy shadows. Part of his mind latched onto the fact that Cassi was sleeping beside him. The need to warn and protect her surged within his chest, but the heavy quilt, the vise across his face, and the fear in his heart pinned him like Christ to the cross.

As he prepared to buck and lunge, the bedside lamp clicked on and Wiley recognized the intruder’s face. His tension drained. He should have guessed.

Wiley looked over at Cassi the instant the palm backed off of his mouth. She was sound asleep. At least she appeared to be …

“And more aromatic,” Wiley mumbled to himself, recalling the perfume in his dream. Slowly, he returned his gaze to the midnight caller and voiced the obvious question with his eyes.

Stuart’s answer was matter-of-fact. “We need to talk.”

Stuart Slider was the invisible man. Compact, sinewy, and average of face. Every time they met he struck Wiley as unexpectedly small. He also enjoyed the annoying ability to appear and disappear at will. Or so it often seemed. Wiley was beginning to detest that trait.

“What the devil are you doing here in the middle of the night?” Wiley asked. “Do you need another hole in your head?”

“We need to talk,” Stuart repeated. “Unseen, uninterrupted, and alone.” He stood, canted his head toward the door, and said “Let’s go to your study. No sense giving Sleeping Beauty here bad dreams.” Without waiting for a reply, Stuart reached out and extinguished the bedside lamp.

Wiley followed obediently, more out of curiosity than any feeling of subservience. They walked down the plushly carpeted hall to the room at the end. The massive oak door to his soundproofed study was ajar. An eerie glow leaked out into the hall from the three-hundred-gallon aquarium within. The ghoulish atmosphere seemed to suit a halothane-assisted secret midnight rendezvous, so Wiley did not turn on the lights when they entered.

Sleepless fish cast darting shadows about the room as pale moonlight trickled in from the east. Wiley sought his favorite armchair, a black-leather recliner. As he sat he discovered a steaming Starbucks cup waiting on the end table beside his right arm. Unbelievable, he thought. Stuart had never been to his island home before, and yet there the cup was—a low-fat latte no doubt—just what he wanted, right where he wanted it.

Setting the creepiness factor aside, the latte was both a thoughtful and insightful gesture. Yet its primary effect was to fan Wiley’s flame. The invisible, unflappable Stuart Slider did not drink coffee or tea or cola. He did not smoke. He did not drink. Wiley was not entirely certain that he even slept. Yet he was always awake, alert, and controlled. What a bastard.

Wiley picked up the familiar cup, more irritated at himself for being weak than pleased to have his fix. It was still hot despite the trip from the mainland. Stuart must have planned even that detail in advance and packed a thermos. Meticulous and a bastard. Wiley took a sip, nodded a perfunctory thanks, and gave his guest a get-on-with-it look.

“Is it true what I’ve heard about this room?” Stuart asked.
Despite the latte, Wiley wanted to go back to bed. He wanted Stuart to get to the point and then get out. But he knew from experience that playing along would get him there faster than resisting. “What have you heard?”

“I heard that the Secret Service turned your study into a fortress because you refused to have the Proffitt family’s ancestral estate updated with the technology and security advances of the past hundred years.”

Wiley rolled his eyes. “For an organization whose purpose is to protect national icons, the Secret Service has surprisingly little respect for history or tradition. I’m glad that I only had to deal with them that one time. They call it a panic room. It was a compromise.” He reached out and picked up a large universal remote control off the coffee table. “Allow me to demonstrate. First I’ll type in the code to let the system know that this is not an emergency, and then …” He held the square red button down with his thumb. After three seconds of constant pressure the door to the study swung shut. Hidden bolts scraped into place as titanium louvers began to lower over the bulletproof windows with a motorized hum. “Now we’re safe from everything up to and including shoulder fired missiles.”

Stuart looked about the room. “You’ve even got a bar and a bathroom in your bunker. Not bad. What’s through that door?” He pointed to the corner.

“What about the cavalry?”

“If I had not told the system that this was a test, then the Hostage Rescue Team would automatically be summoned from Quantico by a beacon hidden in the roof.” Wiley pressed and held the red square again. The lockdown procedure reversed.

Stuart nodded in appreciation and then assumed a contemplative expression.

In that dim light, with his black-clad form framed against the black-leather couch, he appeared as little more than an intense set of eyes. The sight made Wiley think of an alligator in a tar pit. An alligator in a tar pit, he repeated to himself. Now there was the very definition of a Beltway lobbyist.
“I’ve come with news,” Stuart said.

“I’ve resigned my job as executive director of the AADC to work full-time on your campaign. We decided that the time had come, now that things are under way.”

Wiley did not want to talk about the American Association of Defense Contractors or the things that were now under way. In fact he had specifically asked The Three Marks to keep him out of that loop. Thus far his only tactical contribution to things had been supplying them with a list of useful names. He hoped to keep it that way. Still, Wiley did not fail to notice that Stuart’s “we” did not include him. “That’s awfully generous of you. Did we agree to give you your old job back after the campaign?”

Wiley saw genuine emotion flash across Stuart’s face in response to his words. That was a first. Despite playing poker for decades to hone exactly that expertise, however, Wiley could not tell which emotion Stuart had shown. Was it disappointment … or anger?

"I won’t need my old job back after the campaign,” Stuart replied.

“Because, after the campaign you are going to be Vice President—and I am going to be your Chief of Staff.”

Stuart’s statement hit Wiley mid-sip and he choked, coughing and spraying latte over the front of his scarlet pajamas. Stuart did not bat an eye at his discomposure, and Wiley figured that the bastard probably had his timing planned. “Is that what you came here to tell me?” Wiley asked, mopping his chin with his sleeve. “Is that why you broke into my home in the middle of the night, drugged my girlfriend and dragged me out of bed—to talk about your career?”

"An edge of your seat thriller."

"What a thrilling ride!"